In 2020, we have focused on upgrading our fleet and optimising efficiency in order to incease performance and reduce environmental footprint. This has been done in a number of ways, including:

Many of these measures can only be introduced while a vessel is in dry dock. Hafnia dry docks its vessels every five years with intermediate surveys taking place in between – which allows us to provide well-maintained vessels for our customers. Dry docking is an essential part of fleet management. The dry docking process involves taking a vessel out of service in the pools, and sailing it to a shipyard where it will be taken out of the water. Vessels are also given fresh coats of paint, including an anti-fouling layer, which helps reduce friction, allowing the ship to move faster through the water and improving its durability. 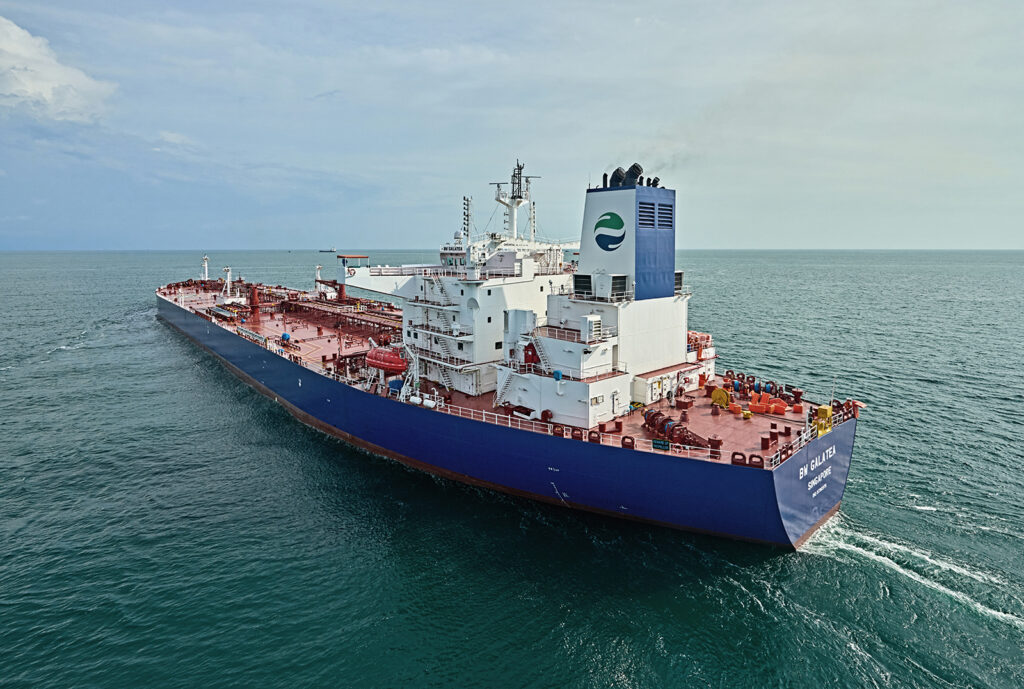 In 2019, BW Kronborg was flagged as an “under-performing” vessel in Hafnia’s performance monitoring systems. BW Kronborg was built 14 years ago, and it had been about three years since her last dry dock. Her hull was fouledastheanti-foulingpaintwasdestroyed, which caused excessive fuel consumption compared to peers, at a rate of approximately 50 MT/day when laden, and 38 MT/day in ballast at 12 knots. As a result, she was scheduled to undergo intermediate dry docking.

Since leaving the dry dock, the vessel is operating close to 98% of her newbuild potential. As a result of this, the vessel will consume approximately 782 MT less fuel per year – preventing roughly 2,466 MT of CO2 and 7,826 kg of SOx emissions.

Eight of our older (built ~2010) MR product tankers from Guangzhou Shipyard International (GSI) have performed relatively poorly. We have made many adjustments to improve their performance, including introducing very high specification anti-fouling paints and vibration compensators during their 5-year dry docking. The vessels are now reaching their second special dry dockings, starting with the Hafnia Pegasus – which was completed in Q4 2020. As there is still room to improve performance, we are making another concerted effort to ensure we’ve explored and implemented all possible adjustments. The adjustment we are most optimistic about is the installation of a Mewis Duct.

A Mewis Duct consists of two strong fixed elements mounted on the vessel: a duct positioned in front of the propeller along with an integrated fin system. The duct straightens and accelerates the hull wake into the propeller and also produces a net forward thrust. The fin system provides a pre-swirl to the ship wake which reduces losses in the propeller slipstream, resulting in an increase in propeller thrust at a given propulsive power.

Hafnia Pegasus’ performance has improved significantly since the recent dry docking. As it stands now, she is performing at 103% of the speed she had as a new building. Her fuel consumption at 12.5 knots is 2.4 MT and 1.8 MT less than new building condition in laden and ballast, respectively. This results in annual CO2 savings of 739 MT.

Assuming these results prove to be significant over time, we plan to apply this to the other seven older vessels, as well as any other vessels that face performance issues in the future. The environmental and economic benefits are clear.

The vessels are being built by Guangzhou Shipyard International (GSI) and will immediately be chartered by Total on long-term time charters with fixed earnings upon delivery in 2023. These dual-fuel vessels were meticulously designed to encapsulate the traits we believe are necessary for ships of the future.

The vessels are designed with the most efficient LNG propulsion technologies available. Not only will their GHG emissions be 5,000 tons per year lower than conventional tankers, but also approximately 30% lower when compared to standard dual-fuel LNG vessels – making them more than ready for Phase 3 Energy Efficiency Design Index (EEDI) requirements. While the vessels’ LNG propulsion systems are certainly their calling cards, the tankers will be unique in many other ways. The high-pressure dual-fuel LNG engines incorporate a flexible design that not only ensures close to zero methane slip but also makes them adaptable to the zero-emission fuels of the future. The vessels will also come with a state-of-the-art fuel gas supply system that has full redundancy on all supply systems so that they can handle boiloff gas from the LNG tanks under any condition. The auxiliary engines for gensets and boilers will also be able to run on multiple fuel types.

Nonetheless, our commitment to sustainability is broad and spans a plethora of social, economic and environmental factors.

The use of LNG as a marine fuel typically results in